The current railroad configuration at Red Rock Terminal poses a safety challenge to the 600 employees and up to 750 truck drivers who enter each day. Currently, trains can block entrances along Red Rock Road for upwards of 45 minutes, despite train operators’ efforts to minimize blockages. 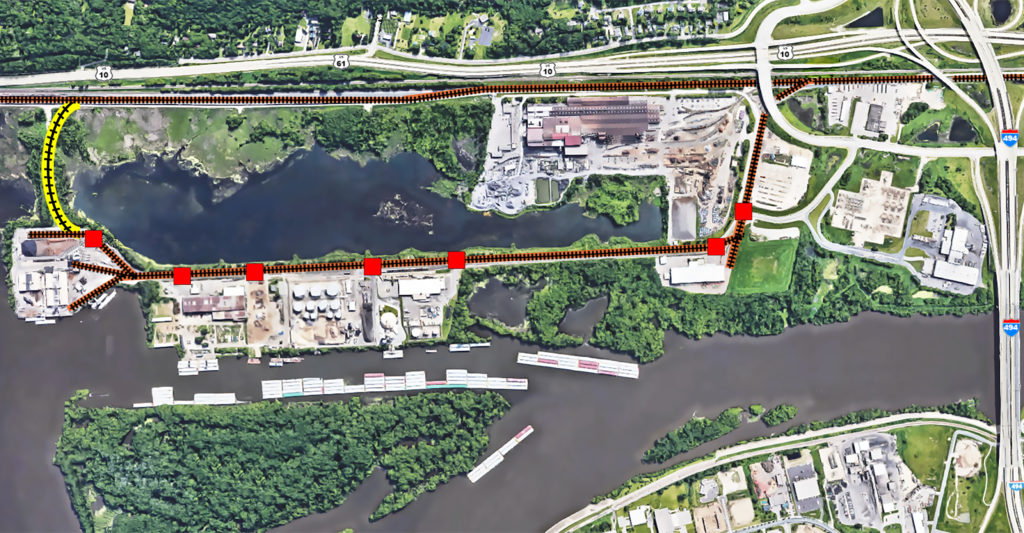 “There’s actually video showing people crawling under and between railroad cars to get to work. While we unequivocally do not condone this behavior, people are going to do what they feel needs to be done. And, their actions can have serious consequences. As the owner of the property, the Saint Paul Port Authority has an obligation to advocate for a solution that promotes safety for all,” adds Krueger.

The Saint Paul Harbor is the northernmost port on the Mississippi River. And, as business activity picked up post-recession, so did river traffic.  In fact, Red Rock Terminal accommodated more than 2.7 million tons of product in 2017. River shipping works in-tandem with the railroads as part of an intermodal transportation system connecting Minnesota farmers to the global market and ensuring the timely delivery of critical products including cement and road salt.

Some neighborhood groups have expressed concerns related to aesthetics and obstruction of future trails. In response, the Saint Paul Port Authority is working with the City of Saint Paul’s Great River Passage Initiative. “By working closely with the Department of Parks and Recreation, we believe we can have the best of both worlds: safe rail access and good paying jobs in harmony with natural river entrances and trails,” said Krueger.

The proposed change will be discussed at the District One land use committee meeting on Tuesday, August 21, 2018. The meeting will be held at 6:00 p.m. at Battle Creek Recreation Center (75 Winthrop Street South). The land in question is owned by the City of Saint Paul. Therefore, city council approval is required to move forward.

Red Rock Terminal is located near Pig’s Eye Lake. It is part of a larger portion of land the Saint Paul Port Authority acquired in the area, most of which has been dedicated for park use. Businesses at Red Rock Terminal include: AMG Resources, Barton Enterprises, Continental, Gavilon, Hawkins, Simcote and Gerdau.

We are a redeveloper of polluted and abandoned land and have been for 84 years.