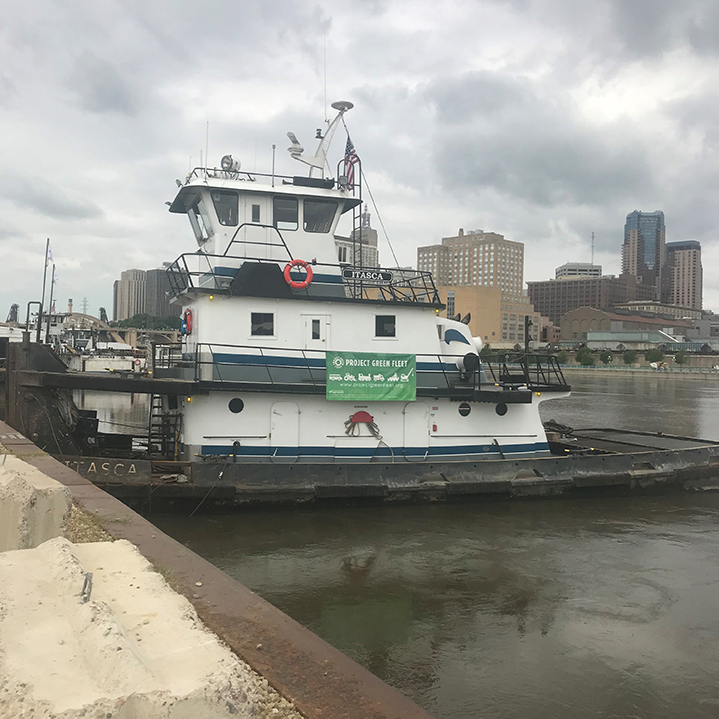 Yesterday, we had the honor of participating in a press event featuring the Itasca, a 45-year old, 65-foot towboat, owned and operated by Upper River Services (URS). Thanks to Project Green Fleet — a Clean Air Minnesota Initiative —  and a partnership between URS, the U.S. Environmental Protection Agency (EPA) and Environmental Initiative (EI), the Itasca’s outdated, diesel-fueled engines and generators were replaced with “greener” alternatives.

The long-term environmental impact will be the equivalent of taking 16,000 cars off the road each year.

Project Green Fleet is a voluntary program that provides pollution control equipment for diesel vehicles at low or no cost to fleets. Technologies reduce emissions by decreasing idling, treating exhaust or replacing entire engines with newer, cleaner substitutes. Since Project Green Fleet’s inception in 2005, investments from both the public and private sectors have allowed EI and the Minnesota Pollution Control Agency to voluntarily retrofit more than 4,600 diesel vehicles, including 3,200 school buses, statewide. This is the pollution equivalent of removing more than 750,000 vehicles from Minnesota roads.

Lee Nelson, president at URS, talked about being excited when he learned about Project Green Fleet but initially didn’t think it would be a fit for his organization due to its relatively small size. URS owns and operates six older towboats with an average age soon approaching 50 years. Nelson’s doubt was soon alleviated when he learned about the support available through EI, including assistance in securing funds through the EPA.

“It’s not always financially practical for businesses to upgrade vehicles like the Itasca with cleaner equipment,” said Droessler. “By leveraging public and private investments, Clean Air Minnesota helps fill the gap between what’s feasible for businesses and what’s right for the environment and community health.”

In Minnesota, we have relatively clean air that, according to Clean Air Minnesota, has actually improved over the past 10 years, so we are fortunate to have the EPA making investments in our state.  “Other states in our region are dealing with air quality issues that are way beyond what we see here [in Minnesota],” said Frank Acevedo, mobile source program manager with the EPA. “The fact that the state has been able to get these relationships working and able to find the projects to reduce emissions is the key.”

According to Dave Benke with the Minnesota Pollution Control Agency, air pollution still impacts human health in Minnesota, especially in urban areas including Minneapolis and Saint Paul. These issues stem from smaller and less regulated sources, including older, high pollution diesel engines. The result is an increase in both heart and respiratory issues. Most impacted are people of color, the elderly, children with uncontrolled asthma and those living in poverty. “Pollution is everyone’s problem. In the vulnerable communities that feel the effects more deeply really need more help from us,” said Benke.

A Drop in the Bucket/River

While river shipping is touted for its ability to move more product using less energy and at a lower cost, there is still room for improvement. The Itasca is only the second towboat to benefit from Project Green Fleet. The Becky Sue, also owned and operated by URS, had a similar overhaul in 2015. The impact was the equivalent of taking 12,000 cars off the road each year.

According to Bill Droessler, senior director of project development and clean air at EI, there are still hundreds, possibly thousands, of older diesel-fueled tugboats in operation across the state and region. “This is just a drop in the bucket – or the river in this case,” adds Droessler.