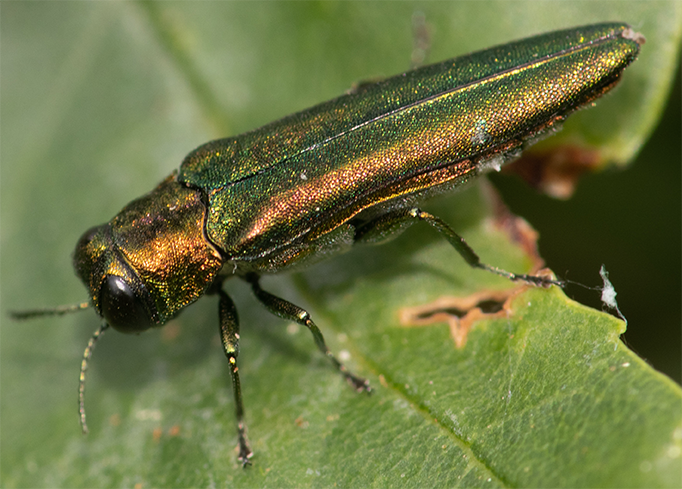 Emerald Ash Borer (EAB) are taking their toll on Saint Paul’s treescape, and the Port Authority is helping to fight back. The City’s plan is to remove, stump and replace 13,000 infected trees, found on public boulevards. The Port Authority will assist by issuing $18 million in general obligation bonds, solely for this project.

What is an Emerald Ash Borer?

EAB is a beetle, native to Asia, first identified in the United States in 2002. And while the beetle itself does minimal damage, its larvae tell another story. During the larvae state, EAB live under the bark, feeding on the trunk below. As a result, the tree is deprived of nutrients.

Identifying EAB is a challenge, but one of the first signs is yellowing leaves and a thinning canopy. Another tell-tale sign is the appearance of unique, D-shaped holes where new adult EABs exit the bark. Unfortunately, if you can see the damage its most likely irreversible. Infested trees have a life expectancy of only three years.

According the Minnesota DNR, EAB infests and kills weak and healthy ash trees alike, and all species of ash native to North America are vulnerable to attack. With nearly 1 billion ash trees in Minnesota, the spread of EAB is a serious threat statewide and not just in Saint Paul.

This project is an ideal fit for the Saint Paul Port Authority. In fact, it hits on all parts of our mission. From an economic development perspective, trees add to the vibrancy of the City and play an important role in attracting residents, businesses and visitors alike.  In terms of sustainable development, trees reduce air pollution, mitigate climate change, and regulate water flow. Combatting Emerald Ash Borer in Saint Paul will also protect homeowner’s property values, which in turn protects the tax base. And finally, this program will lead to more jobs in Saint Paul over the next five years.

“As a member of both City Council and the Port Authority Board, I fully support this partnership because it offers job opportunities and a sustainable and equitable solution to a significant problem in our community. Trees are an important part of our infrastructure and must be protected,” adds Dai Thao, Ward One.

Before City Council can approve this projet (Ordinance #21-23), they must conduct three separate readings. The first was on June 10. The second is on June 17 and includes a public hearing. The final reading is scheduled for June 23. Once the ordinance is in place, we will be going back to our board of commissioners to approve a Joint Powers Agreement (JPA) between the City and the Port. Because the City owns the trees, the JPA will give us the ability to use Port Authority tax-exempt bonds for this capital project even though these are not our trees.

Going forward, we expect the bonds to be sold as soon as practical, targeting late 2021 or early 2022.  The City of Saint Paul plans to plant 2,000 new trees per year. The project should be complete in 2026.